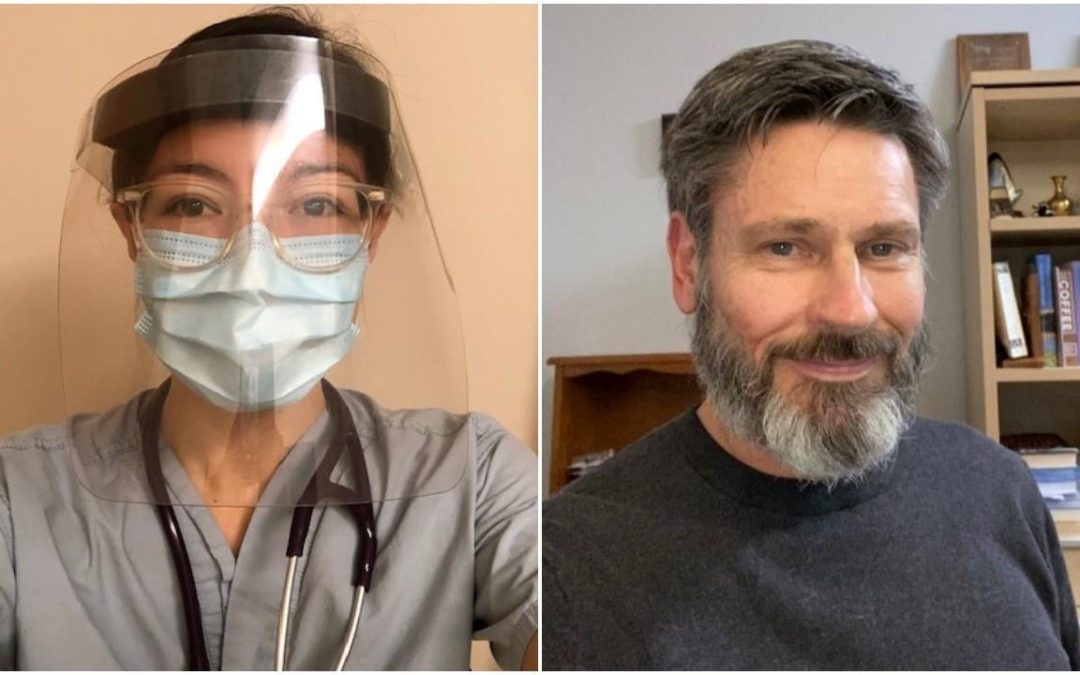 Hamilton-Niagara
Regional Essential Access to Connected Healthcare’s goal is to provide accessible care — but to do that, it says, Ontario needs to change its funding approach
By Justin Chandler – Published on Dec 08, 2020
Cutline: Mo Moore (left) started working as a doctor with REACH in November; Karl Stobbe is REACH’s medical director. (Courtesy of Mo Moore and Karl Stobbe)

ST. CATHARINES — Karl Stobbe has a clear vision for what health care should look like in his region: “We think that people in Niagara that are poor and homeless should get the same access to doctors as in other places.”

The medical director of Regional Essential Access to Connected Healthcare, he oversees a team of doctors and nurses that provide health care in Niagara’s homeless shelters. One of the things that acts as a barrier to the kind of accessible, equitable care REACH aims to provide, according to Stobbe, is the way the province pays doctors — that’s why it’s asking the government to consider a new approach.

Currently, doctors with REACH bill to the Ontario Health Insurance Plan under a fee-for-service model, meaning they make money based on how many people they see and the type of service they provide. “That funding scheme is designed for fairly busy family-practice offices, where people can quite quickly tell the doctor what’s wrong. They’re relatively brief interactions,” says Stobbe, who taught and practised rural family medicine for over 20 years. But often when dealing with those experiencing homelessness, the appointments take more time, he explains: “Many of them have 10 or 15 problems, and they all interact with each other.”

According to a 2019 briefing from Public Health Ontario, “homeless individuals experience higher rates of infectious diseases, such as tuberculosis, hepatitis and HIV compared to the general population, and mental health issues at greater rates than the general population.” And, Stobbe notes, it is often tough to find OHIP numbers among the homeless population. (A 2011 study of Toronto data found that about 34 per cent of people experiencing homelessness did not have a health card.)

“With the combination of missing OHIP numbers and the longer time it takes, it ended up that, pre-COVID, the amount of dollars that a doctor would be earning serving homeless people would be about a third of what they would normally make in their office,” Stobbe says, noting that it has been “extremely difficult” to recruit doctors.

While doctors’ compensation varies by speciality, funding model, and where they work, a government submission to an arbitration panel in 2019 found that an Ontario family doctor working under a fee-for-service model makes about $200,000 before expenses (according to one report, overhead can range from 12.5 and 42.5 per cent of net income). “People have to be fairly remunerated,” Stobbe says. “Nobody wants to get rich doing this, but they can’t be paying a penalty, because what will happen is the altruism sort of wears off once people end up having unforeseen expenses or kids going to university or that sort of thing — we needed something different.”

REACH’s pitch to the Ministry of Health and Long-Term Care is for that organization to piggyback on a 15-year-old alternative-funding framework in Hamilton, where Shelter Health Hamilton has been operating under a plan that provides hourly pay for doctors, psychiatrists, and internal-medicine specialists (nurse practitioners and other providers would not be covered). Stobbe says the hope is that REACH will be able to partner with Shelter Health and that the plan could be extended east into Niagara.

A Ministry of Health spokesperson told TVO.org via email that REACH’s request has been received and that “staff is in regular contact with the physicians as the proposal undergoes the internal review process.”

Prior to March, REACH was operating clinics in three St. Catharines shelters. The in-person clinics were set up with space from the shelters and philanthropic funding, as well as donations from doctors, for equipment and supplies. Since the pandemic, doctors have switched to providing mainly virtual care, with limited in-person visits as needed, allowing REACH to serve more shelters. “Everything changed with COVID,” Stobbe says.

A provincial response to the pandemic that allows doctors to bill to OHIP for care of patients who would be otherwise uninsured has helped, Stobbe says, noting that it’s allowed REACH doctors earn up to about 50 or 60 per cent of what they would make in a practice.

Kerry Beal, the medical director of Shelter Health, in Hamilton, worked early in her career with Stobbe. While patients lacking OHIP numbers continue to be a challenge — Beal says she works two to three hours each day trying to track COVID-19 test results for such patients — her organization’s alternative-funding plan has mitigated cost concerns. “In order to pay to keep ourselves going, we would have to be billing OHIP for lots and lots and lots of patients, and, of course, our lots and lots and lots of patients don’t show up — we are queen of the no-shows,” Beal says. The funding model, which also provides some money for administration, is “a way of making sure that the doctor will be there for a set number of hours. It guarantees some income in order to cover health care for the population.”

REACH’s push for funding comes at a time when community support workers in Niagara and beyond fear that COVID-19 has exacerbated the poor conditions of people experiencing homelessness and may lead more people to lose their homes. Niagara Falls city councillor Wayne Campbell successfully moved a motion on November 17, calling on Niagara region to declare a state of emergency on homelessness and mental health. “The number of shelter spaces around the region is increased quite a bit and they’re almost full; in fact, many of them are overflowing,” Stobbe says.

For Mo Moore, a doctor with REACH, income is a barrier to providing shelter care full-time. “For care to be sustainable, I think there needs to be a bit more of an organized funding model,” she says, adding that she offsets her work in shelters with other clinical work in part for financial reasons and also for a change of pace. “I think there would be a risk of burnout, too, if you did only this type of work full-time.”

Moore says that as she and other doctors build trust with people staying in shelters, patients open up and seek more help — but it takes time. “When they’ve had negative experiences with health care, that certainly reduces the likelihood that they’re going to seek care in the future when they need it,” she explains.

“The homeless population really needs care more than any other population: they have more complex medical conditions, more comorbidities, more disability,” she says. “But they’re the ones not getting as much care because of the barriers.”

Ontario Hubs are made possible by the Barry and Laurie Green Family Charitable Trust & Goldie Feldman.